Kephart Prong trail isn’t one you’ll commonly hear about when hiking in the Smokies. It doesn’t have ridgeline views or waterfalls to speak of, but it’s not lacking in beauty and historical features. It’s a shorter hike that’s easy to moderate which allows for a nice add on hike after you’ve done something challenging such as Chimney Tops or Mt. LeConte.

The hike starts by crossing a bridge over the Oconaluftee River. Take a moment to listen to the water as it rushes over the rocks strewn in the riverbed. The trail follows the Kephart Prong from where it meets with the Oconaluftee River to the Appalachian Trail. If the Kephart names sounds familiar, its because it was named after writer and park advocate Horace Kephart.

At .2 miles, the trail takes you through the remains of a Civilian Conservation Corp camp so you’ll see relics and artifacts such as a water fountain, fireplace and old rock frame for the camp signage. The camp was one of a few in the Smokies which held conscientious objectors during World War II.

A favorite part about hiking this trail is all the water crossings over the footlogs and bridges.

You’ll cross four as you make your ascent up to the termination point of the trail which is Kephart Shelter. One of them bears the mossy stonework from the CCC construction from over 80 years ago. 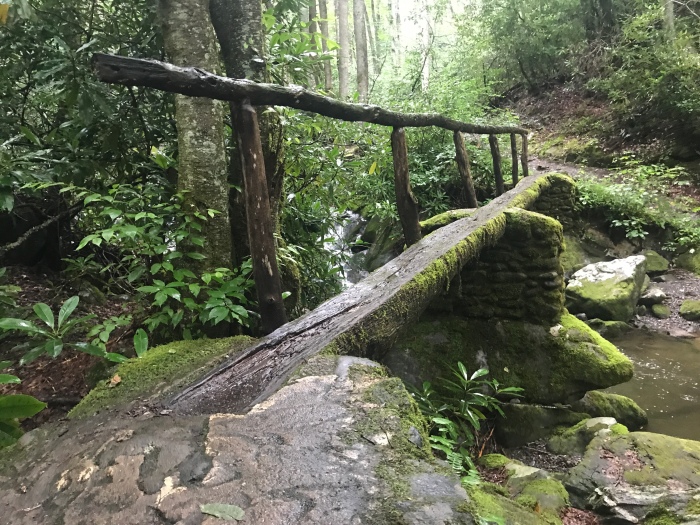 What I noticed about this particular hike is how green and lush everything was during the summertime. Also it’s one of the quieter hikes in the park, and you won’t find it as crowded as other trails. Some hikers use this trail as the start of an alternative route to Charlie’s Bunion so it avoids the throngs who take the more popular route from Newfound Gap.

The trail follows an old railway and the grade is moderate. Be on the lookout for some old railway irons during the final .2 miles of the hike. These are remnants from the logging that was done in the 1920s. 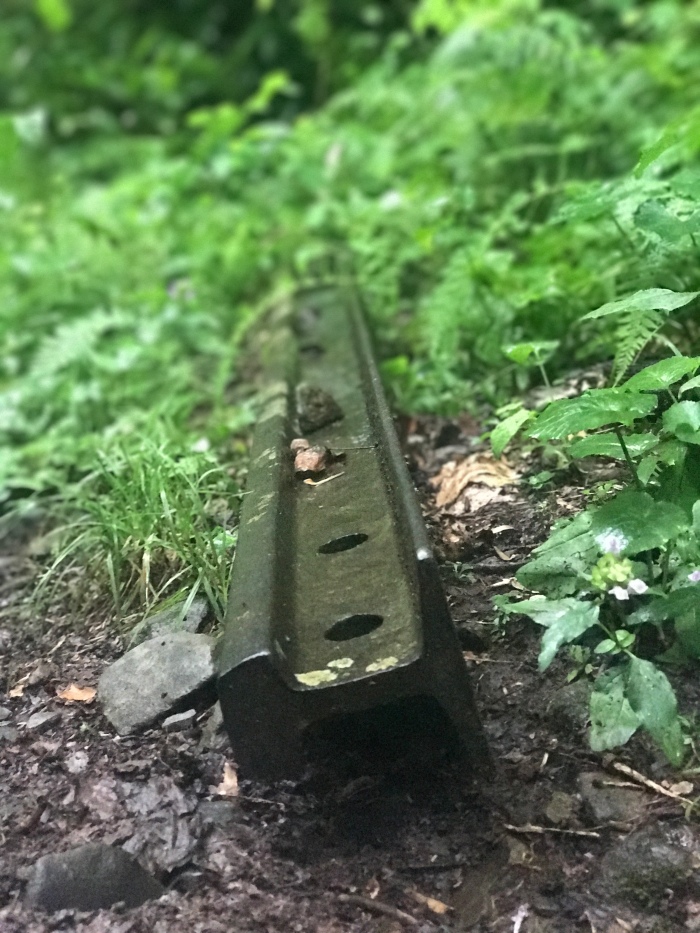 At 2.1 miles you will the reach the Kephart Shelter where the trail ends and intersects with the Sweat Heifer Creek Trail and the Grassy Branch Trail. Take some time to explore the shelter before retracing your steps back to the Kephart Prong trailhead, making for a nice 4.2 mile hike.

This hike combines historic features, streams and a gentle grade which makes it a nice introductory hike for someone new to being on the trail or who might not be up for a more strenuous hiking experience. So if you’re up for some exploring a bit of Smokies history, consider taking this lesser known trail next time you head to the park.

To learn more about the CCC’s time in the park, listen to my Hike podcast.